Tell me the story! 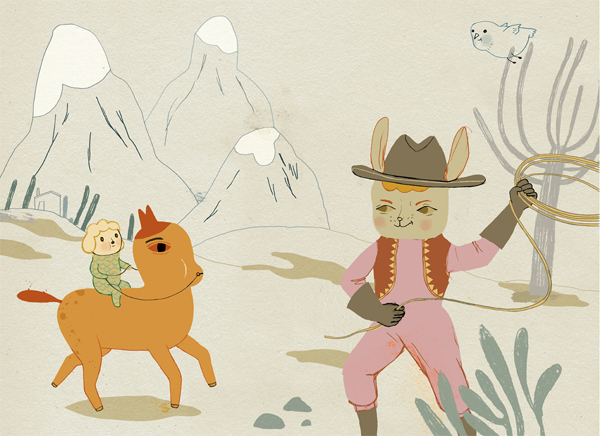 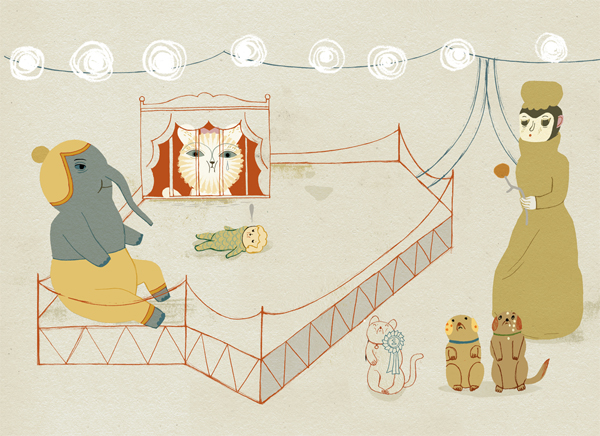 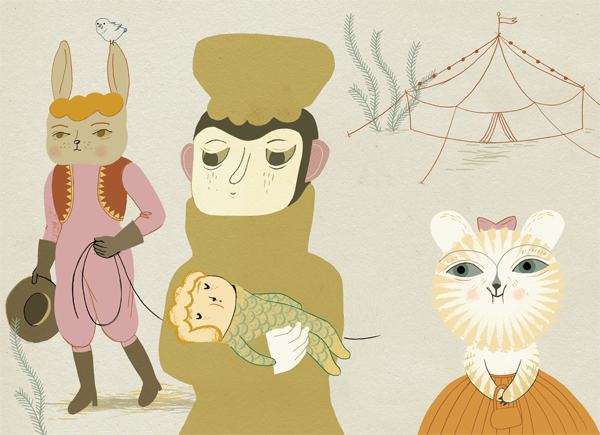 Tell me the story! Before the 5th of March.
The person behind the best story will get an item from the Studio Morran shop, for free and of choice :)

A quick reread at my frenzied typing above and I see a typo in the first line. Where it reads *stayed it ought read *strayed.

Try this instead, all mistakes fixed:
"I'd not realised I had strayed so far into the wrong territory until it was too late. Thinking I was on the safe side of adventure, things took turn when from behind the shrubbery Pink Rabbit Man appeared, his lasso masterfully twirling and looping overhead. I think I heard him almost before I saw him, but all too late. Caught in a flash by the loops and skill, I was bundled into a giant old sock and later awoke in a circus ring odd proportioned. A dual expected between a giant elephant and little me; I knew not what to do. The elephant though, she took kindly to my plight and me, and pretended to knock me about with her agile haired trunk. One wink from her and I knew come dusk we two would make good our plan to escape."

BANDITO and the MINI WOO-WOO.

Bandito was annoyed.
His mother had made him wear his pink jump suit AGAIN!
In his bad mood he thought he would steal a Mini-Moo-Moo and put it into his Mother’s circus.
Now, everyone knows that Mini Moo-Moos are the most boring creatures on earth and Bandito thought that it would ruin his mother’s exciting show.

At the Circus the Mini-Moo–Moo was put on the stage.
At first it did nothing, the audience were getting bored and then it suddenly started to sing…
It was the sound of Icicles in the desert,
Buttercups in the dark, Rainbows in Tea cups
and Swallows singing from the depths of the dark blue ocean.
All where moved.
All were speechless…

…Except Bandito who decided to bid Goodbye to his Mother and the Circus and he left to spend a life of good, planting trees in far away places that were turning to desert.

And the Mini Moo-Moo?
It slept in Mother’s loving arms and it had the most boring dreams of washing up dirty dishes and business meetings with dull men in grey suits.

There was never a dull moment in the life of Scarlet Scales. Her morning horse rides were filled with encounters of all sorts. The day she met a wild
rabbit waving a lasso just about to catch a bird was memorable. He said if you continue towards three white mountain tops you are sure to find the circus tent. No one has ever came out victorious making the Indian elephant crack a smile. Whoever is clever enough to succeed such a challenge will allow Mishap Cat who accidentally swallowed the elephant's smile a long time ago to leave the cage for once and for all and be forgiven for the incident. When Scarlet Scales asked to make the elephant smile all cat (the first prize winner mind you, of what, that is top secret) and dogs and human confused gathered around to watch it happen. Scarlet let go the longest and convincing sigh and fell to the ground. An impressionable stunt. Enough to make the elephant fall back on his rump and make his mouth curl just so lightly it counted as a smile! Mishap Cat, the wild rabbit and the monkeyly human left while they could. Scarlet exhausted of the fantastic feat rest in arms and fast asleep of an unwakeable sleep. She took in too much of the high altitude mountain air in her littlest lungs. Though now we are stuck with an added problem : to awaken Scarlet Scales is a challenge and task yet no one has figured out!

It was a cold winter day and I was out for my daily flyabout, minding my own business, when I saw this odd looking fellow in a pink jumpsuit and a cowboy hat kidnapping a wee blonde child and her orange pony. It was a most terrifying sight! I decided to fly after them and see where the pink jumpsuit-wearing cowboy was taking them.

I will never forget the horrors I encountered next! I followed them into this big circus tent where large animals were trapped in cages, all the cats and dogs were crying and tall ladies walked around with flowers. I had to do something! I could not fly by and let my fellows in the animal kingdom suffer in this miserable place.

So I had a little chat with the cowboy in the pink jumpsuit. He told me he was just following orders from the circus management… he felt guilty. He didn’t like to capture innocent fellows from the animal kingdom, knowing they would be exploited, but he could not afford to be fired. After all, the economy is bad and he had a mortgage to pay.

It was a difficult situation… there was no easy solution. But then the fellow in the pink jumpsuit stood up, removed his cowboy hat, looked me in the beak and said – “if we all work together we can create something new”. And so it was. We went into the tent, freed everyone from their cages and together turned our backs to the circus once and for all.

"From my point of view, it was fun and an excellent performance, like all the dadaist ones before. The snow up on the mountains glittered like the lamps in the tent down in the valley or the glycerin tears that Sweet Tiger Sue used in every show. She is a real character actress, there´s no doubt about it.
I have had long discussions with The Pink Hare about the inner meanings. Some of them have been boring, I have to admit. He is a little bit humorless. Well, he knows how to use lasso. And that´s what counts here. He has always succeeded. Everybody admires him.
But Lady Ape is the real hero, I think. She doesn´t speak at all but is pure love and care. And when she starts to sing! Her voice is like crystal.
She takes care of all the small ones here."
That is what The Little Blue Bird told me when i asked her about her life in the circus.

I really like your blog:) Great pics and som much inspiration...I wish you a lovely week.
LOVE Maria at inredningsvis.se
(Sweden)

From Arteriole (commented on the studio morran blog)

Once upon a time, there lived a young princeling, the son of the Mightiest Silkie. The Great Silkie wanted his son to be a wise ruler and gave him a magical coat of glittering green and gold scales. "This coat will enable you to live on land, my son, but take care, you must bathe in the sea every full moon, or you will surely perish."

The young princeling performed many deeds of great renown, climbing hills, and taming wild ponies on the moors. But every full moon, he returned to the sea to wash his glittering coat. One day, while galloping on his favorite pony, he came upon a cowboy, who was practicing with a lasso.

The cowboy was part of a traveling circus, and he convinced the young princeling to run-away from his mountain home and little ponies, and to join him in the circus, where he could ride elephants as tall as mountains, and tame ferocious wild tigers. The princeling was persuaded by the cowboys words, and did not heed his father's warning, but joined traveling circus. Days passed, and the princeling forgot about his father, and the sea. His magnificent coat became dusty and dented and no one would have recognized the little dirty boy as the son of the great silkie.

One night under the hot spotlights, the princeling was performing a double somersault from the back of the elephant, when he suddenly crashed to the ground. Everything was tried to revive him, but it was no use, for what the little princeling needed was to bathe in the deep salt sea, for the full moon was rising.

The tiger began to cry, and her huge salt tears splattered onto the little princeling, revealing flashes of his glimmering coat. From the audience, there arose a mysterious lady, who came towards the ring. It was the princelings mother in disquise and she had recognized his shimmering coat. Scooping him up tenderly in her arms, she carried him away from the circus, back to his father and his rightful home in the sea. The little princeling grew up to be a Great Lord, and was wisest and kindest Ruler that ever was.

As a child I dreamt of running away to the circus. As a child she dreamt of heading back to the ranch. An absent father, a grueling work schedule, and never a room of her own in which to arrange her knick knacks or whatz-its. Not everything is ideal for a young critter contortionist. It's tiring work.
What she does know, is that in dreams, the chores are already done. The horse is already saddled, and her Buckaroo Pops is ready and wranglin'. All that's left to do is ride, ride, ride.

ah, to dream such dreams.

These stories have been fun to read, and I can see now a third image which previously (owing to my super slow internet connection) did not load my end. Me thinks my story may have come to a different end with this.

I was directed to your post via Poppytalk. I write for Persephone Magazine and every Sunday I host a 'writer's challenge'. Would it be ok if I used your challenge here in this Sunday's post?

(You can see examples of the challenges here: www.persephonemagazine.com )

Title: I have a dream

All the animals tried to help Hina, the Keeper of Dreams fall asleep. They lowered the lights and they sang lullabies. The world was getting so sad without any dreams.

When trying to catch a horse for the fair, Rabbit made a mistake and caught you unawares! You in the ring made us all a bit sad…So we gave you some love leaving everyone glad!

Camilla,
I send you my simple love story. Hope you like. (Sorry for any incorrect English)

The 1st of March is in love with the 29th February.
He waits every 4 years to be near her in the calendar in my secretary. And he wonders what she does, meanwhile?
Does she travel around the world in a boat, looking for adventure or better climate?
Does she goes visit her friends in the Moon and stays there watching us on Earth, peeking us every day and night? Maybe she grabs the hair of a comet and merry-go-round in the solar system. Oh that should be so fun!
Or maybe she stays with some other day time, in a foreigner different calendar? Oh no!, does she come back to him?!
He wonders what she will wear this year. What news she is going to tell him for the entire day. He wonders and he wonders…
But what he doesn’t know is, this year, she is going to stay for good, and be next to him until the end of time.